I enjoy clubbing and pop/rock concerts exclusively with my ear plugs in. Does that mean I miss out? No, I enjoy the music exactly as it is meant to be.

Since 2004 the urban dictionary includes the term ‘deaf rave’ to describe a ‘rave, or party, organised by deaf people for deaf people, though hearing people are invited also’. Deaf people at a rave? Do they come for the flashy lights? No, the phenomenon behind deaf people’s enjoyment of raves is at the heart of why I wear ear plugs when going clubbing.

Deaf people enjoy loud music – i.e. strong air vibrations – through their skin – an organ signalling vibrating input. Hearing people’s skin is no different but we often fail to notice our skin-hearing because ear-hearing trumps it, given its greater sensitivity. However, once the volume is cranked up, as at many night clubs and concerts, the skin can do remarkable things.

For example, ordinary people can distinguish instruments whose sounds they can only feel on their backs (even deaf people can do this) (Russo et al., 2012). Moreover, ear-hearing can be affected by skin-hearing. When hearing different rhythms through the skin and the ears, people are worse at distinguishing the currently heard rhythm from a previous one, compared to the case of just ear-hearing the current rythm (Huang et al., 2012). Thus, the skin is an important organ for music listening. You cannot just ignore it.

All I do when putting in ear plugs in the night club is that I give my skin a slight advantage. And this advantage makes the music more intimate. Think about it, the skin is an organ which usually only reacts to objects which are extremely close. Compare this to our ears and eyes which react to objects far away. Seeing and ear-hearing a band is something we do at a distance. Skin-hearing a band creates an illusory proximity, as if the music was right there on your skin. 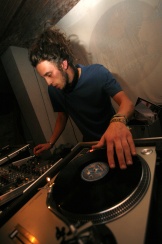 Picture by By Darshan08 (CC BY-SA 3.0) via wikimedia commons

I believe that this illusory proximity through skin-hearing is a major motivation behind the loudness one experiences in clubs and at concerts. Ear plugs are great for your intimate full-body experience of the music. The loudness of the music is not meant for ears. The proof of this seemingly nonsensical statement lies in the statistics of hearing loss. About half the people exposed to loud music during work have some hearing loss. This includes the musicians themselves, whether classical or rock/pop. And the audience is not immune either. The majority of rock concert attendees experience temporary auditory problems such as tinnitus or being hard of hearing (Zhao et al., 2010).

Clubbing and pop/rock concert music is simply too loud for unprotected ears. It is meant for the skin. Give your skin an advantage and protect your hearing with a simple, cheap, handy device: ear plugs.